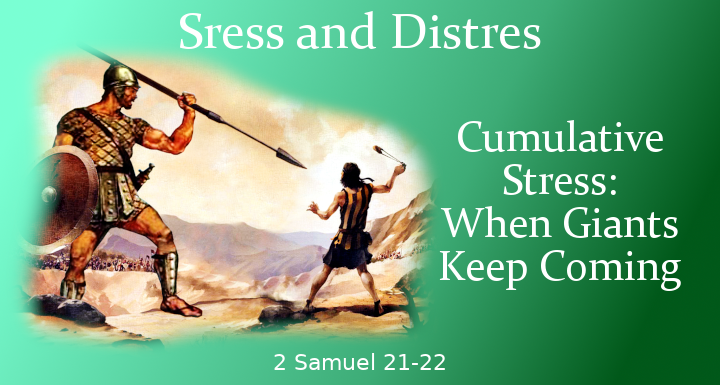 We’ve already looked at circumstantial stress and relational distress. Today we look at cumulative stress, stress that just piles up. The Holmes-Ray Stress Inventory is a scale that rates how stressful certain life events typically are. When you add up all your stress over the past year, they say that if your score is 350+ you are likely to have a breakdown in the next two years. Stress can really add up and affect lives.

Cumulative stress means stress that accumulates in your life. We can handle one or two stressors in our lives, but what do we do when stressful events seem to pile up? You probably know that David killed a Philistine giant named Goliath. Did you know there were other Philistine giants who attacked David and his men? What do you do when the giants keep coming? … Wait, just how big were these giants and is this possible to be that tall? We’re told Goliath was 9 feet tall. Even in recent history there was a man, Robert Wadlow, who was 8’11” and still growing when he died at only 22 years old. Wadlow was a rather skinny man but weighed over 400 pounds just because he was so tall. Imagine how much Goliath and these other giants must have weighed as warriors likely with broad shoulders and large muscles. Well, he was a descendent of Rafa and had brothers and cousins. Some of them were also giants and they attacked Israel.

How do you deal with cumulative stress?

One more thing: Committing your life to God will increase some stress in your life. Our goal is not stress-free living. Our goal is to follow even if that causes us greater distress. … Following Jesus will introduce certain new stresses but it will also get rid of other stresses that are caused by sin.

Adoniram Judson, one of the more well-known missionaries, was serving in a dangerous location in India. He was in love with a woman, Anne. He sent a letter to her parents asking their permission to marry her and take her to this dangerous place where they could die any number of ways. It had to have been stressful writing that letter, reading the letter, and allowing their daughter to go. Serving in such a place also must have been stressful. Eventually Anne would die of a sickness. But not before becoming the first person to translate the Bible into the local language. 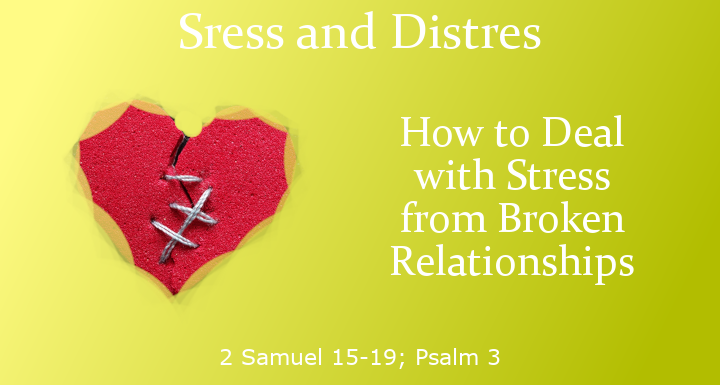 There’s good stress in life. For example, the strings on a guitar are under stress and make beautiful music, but if you tighten them too much, putting them under too much stress, they’ll snap.

Ten years before the events we’ll look at, Absolam killed his half-brother because David, who was furious, refused to punish him for raping Absolam’s full sister. Absolam then fled the kingdom. David longed to be reunited with Absolam but there was this barrier that kept them from each other.

David’s son, Absolam, rebelled against him and tried to take the kingdom from his father. David’s reaction models how to deal with relational distress.

David’s encounter with Ittai, Zadok, and Hushai reminds us to focus on good relationships in times of distress (2 Samuel 15:14-34). … Ittai, one of his sons, is an image of loyalty here. Zadok the priest also shows his loyalty to David. Then David heard that one of his elder advisors was helping Absolam, but another of his advisors (Hushai) offered to help counter any knowledge the traitor gave to Absolam. … We all need people in our lives we can count on in times of need. This is why being in a connection group and part of the local church is important.

David’s encounter with Shimei reminds us not to retaliate in times of distress (2 Samuel 16:5-13). … Shimei is throwing rocks and cursing at David from above, so one of his people takes offense and offers to cut off Shimei’s head. David stops him and allows God’s plan to play out.

During this time of distress, David wrote Psalm 3. … Absolam’s spy gave him some good advice on how to defeat David, but Hushai gave Absolam some different advice and gave David time to get away.

David determined that he would sleep (Psalm 3:5-6).

Eventually Absolam died in a rather dramatic way (2 Samuel 18:9) and David went back to Jerusalem to retake his seat on the throne. Remember Shimei? The man who threw rocks and curses at David? He came crawling back to David seeding forgiveness and David forgave him. 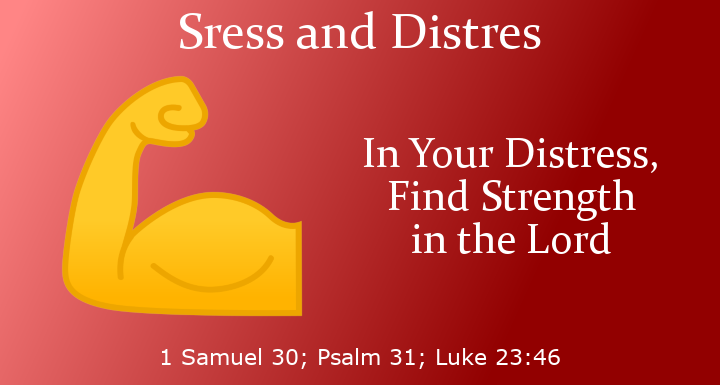 Many things can cause stress: money, work, school, family, and many more factors can cause stress for us. Some stress is good. It can help us grow and reach new achievements. But some stress, often called distress, has negative effects on us.

Background: God had made a decree back when Moses as leading His people that He would completely wipe out the Amalekites. God entrusted Saul with part of this task, but Saul spared some of Amalekites. This is part of why God rejected Saul as king and eventually replaced him with David.

What was the cause of David's distress in this passage (1 Samuel 30:1-6)?... Saul had raided Ziklag, where David and his men had set up as a base and left their families there. David's men were upset; they had followed David and trusted him, but now their families had been taken from them because of him. Apparently they discussed stoning David.

How did David respond to his distress (1 Samuel 30:6-8)?... David got alone with God and found his strength in God. David sought God's direction as he asked what to do next; whether or not to pursue the group that raided Ziklag…. A couple of chapters before this, Saul faced distress, but instead of turning to God, he turned to a witch; he turned to false religion…. Gold answered David and said to pursue the raiding party, and that they would surely overtake them and defeat them. So they left, late in the day, and went after the raiding party. Some of the men were too tired to cross a river and were left behind. Then they met an Egyptian, a slave the Amalekites had left to die, and he led them to the Amalachites. David and his men rescued their families that were carried off.

David wrote about his experience in Psalm 31. What is David's testimony and prayer in the psalm (Psalm 31:14-16)? … David trusted in God and asked for deliverance from his enemies.

Who quoted the psalm in another time of distress (Psalm 31:5, Luke 23:46)?... Jesus knew the Old Testament; He knew the words of David and He used them. 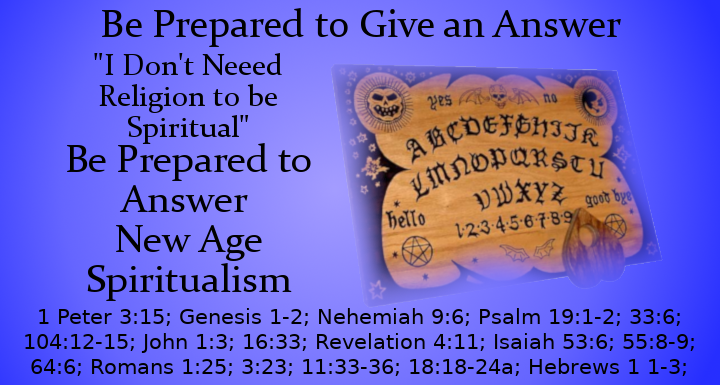 This is the final sermon in this series about being prepared to answer others who have questions. 1 Peter 3:15 has been our theme verse and it tells us to be ready to respectfully and gently defend our faith.

We’ve only covered a few worldviews and there are many more out there.

New Age Spiritualism hold that oneself is one’s own god and is not an organized religion. They hold  pantheist view that everything in the universe is god and god is everything. Everything is divine. But “self” is sovereign over all. This is a bit like the “force” in Star Wars where the force is in everything and everyone and it connects us all. They meditate to clear

Why is Christianity a more plausible worldview?