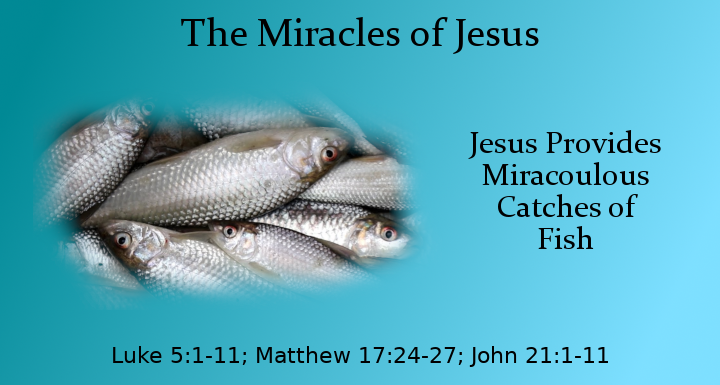 This week we look at three miracles involving fishing. Simon (who they called Peter) is also involved in each one.

Luke 5:1-11: A Large Catch of Fish … Jesus was preaching and then He tells the fishermen to drop the net on the other side. Peter responds that they’ve already worked hard that day and had little to show for it. But since it was Jesus giving the order, they would do it. Well, they caught more fish than they could handle and had to get help from a second boat. Peter fell at the feet of Jesus and Jesus called him to be His disciple and to become a fisher of men.

Matthew 17:24-27: A Fish with a Coin in Its Mouth … Peter was asked if Jesus, his teacher, paid the temple tax. The temple tax is one that the religious teachers had to pay. Whether or not Peter knew for sure, we don’t know, but he answered that Jesus does pay it. It seems as though Jesus knew about this conversation because when Peter gets back to Jesus, Jesus asks him about taxes and who should pay them to whom. Then He says that even though He doesn’t have to pay this tax, He will so He doesn’t offend and cause conflict. So He tells Peter to go fishing in a specific location where he will find a fish with a coin in its mouth that will more than cover the tax.

John 21:1-11: Another Large Catch of Fish … Jesus tells more fishermen, including John and Peter, to cast the net on the opposite side of the boat. So they do, and they catch 153 fish without breaking the net. Peter realizes it’s Jesus and jumps of the boat, swims to shore, and runs to Jesus.

These are miracles of providence or guidance. Jesus directed the creatures of His creation to fulfill His purposes … One thing about these miracles is that they are relatively small things. Jesus catches fish and pays taxes. This shows us that Jesus cares about the little things. God provides even in the little things.

Do you believe Jesus still performs miracles of providence?